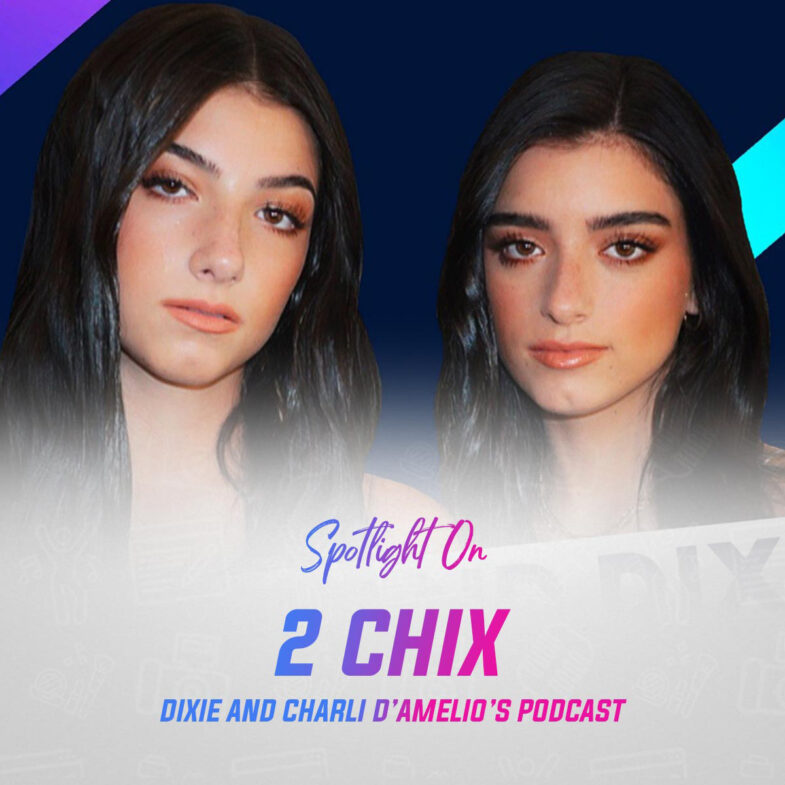 If you’ve been on the internet, you’ve at least heard the names of Dixie and Charli D’Amelio. Gaining traction on TikTok, these sisters are now captivating every platform, their latest being a podcast titled 2 Chix.

2 Chix is the “Personal Journal” podcast of Charli and Dixie D’Amelio. The podcast is a collaboration between the girls and Ramble. Ramble also publishes Emma Chamberlain’s podcast and The Try Guys Podcast.

Why Is Charli and Dixie D’Amelio’s Podcast So Popular?

Dixie and Charli D’Amelio have been podcasting for one month – as of this article –  and have already become the second most popular podcast in the category Personal Journals on Apple Podcasts.

You may be wondering, what about Charli and Dixie’s podcast is so alluring that it has become a success almost overnight?

We’ll discuss the five elements that are the essence of their success in podcasting.

Charli and Dixie D’Amelio started their journey to internet stardom on TikTok but, thanks to this digital age, they’ve continued that success to other platforms like YouTube and Instagram. In addition to gaining success on other platforms, they’ve also had success in various genres like music and acting. By all accounts, Charli and Dixie D’Amelio are mainstream stars. It is that golden touch that’s enabling them to be successful in the podcast arena.

Instead of relying on one sister to carry the show, the show relies on the dynamic between Charli and Dixie. This dynamic is quite relatable to their teen audience, who are still dealing with sibling rivalry and dynamics in the same home. However, having a co-host format also enables listeners to get two perspectives on topics they’re covering.

The sister’s entire audience is probably younger than them, if not the same age. Younger audiences are notoriously straightforward to monetize because they are fiercely loyal. It is this loyalty that makes their audience want to consume any content they create, regardless of the platform, the genre, or the medium. Having a younger audience has also had a significant impact on them achieving trendsetter status. Because younger audiences are more impressionable than their more mature counterparts.

You can also attribute their success to their bite-sized content. You can define this content through two core characteristics:

While Emma Chamberlain’s podcast usually passes the one-hour mark, Charli and Dixie D’Amelio’s podcasts have remained under 30 minutes. This allows their audience to keep up with the storyline without it taking too much of their time.

So far, keeping the topics light-hearted is a strategic move. How many 15-year-olds want their influencers to tackle subjects like politics, social justice, or science? And how are two young influencers’ views on those subjects going to have any significance since they’re still developing their world views? However, talking about subjects that they have some knowledge of or experience in will be far more relatable to their audience.

Ramble is the company behind the 2 Chix Podcast, however, it also publishes other influencer podcasts. In Charli and Dixie D’Amelio’s case, it is unlikely they would have entered the world of podcasting without a publisher like Ramble.

Ramble’s formula is to establish what they call ‘tastemakers’ in podcasting.

Because most podcasts target listeners in their early twenties and beyond, Ramble’s collaboration with young influencers enables them to monopolize this space.

Can Anyone Have Success With the Style of Content on 2 Chix?

Before this resurgence of podcasting into the mainstream, podcasting remained a platform for the very opinionated to give opinions. And in many cases, podcasts followed a traditional radio format. Either with the host interviewing guests or the co-hosts discussing on-trend topics in a manner that expands on the news.

However, unlike most podcasts, Dixie and Charli D’Amelio’s podcast is mostly about sharing their lives with listeners.

If you listen to the 20-or-so minutes of the 2 Chix podcast, you’ll hear that you’re getting a glimpse of the D’Amelio household.

For most aspiring podcasters, this format isn’t going to be possible. Because it requires an established audience to succeed. It’s far easier to be successful with podcasting if you cover:

You want each of your episode titles to cover topics listeners will be searching for and intrigued by without knowing much about the host. The most captivating topics are always going to be the ones in the news, the subjects making headlines.

You don’t need to cover divisive topics. You can cover social media trends, Twitter news, or general gossip – as there’ll always be an audience for this type of content.

Listening to a podcast is like exploring the mind of the masses. It gives regular listeners insights or helps them form opinions they may not have had before. While influencer podcasts usually follow the formula of a conversation with your friend, most mainstream podcasts follow a very specific format and cover topics that relate to their niche or category. If you want to reach a level of success with your podcast it’s better to follow that same formula.

If you want to start a podcast, there is one lesson you can take away from Dixie and Charli D’Amelio’s content, and that’s to keep your episodes short. It is unlikely you’ll receive any traction talking about your life. Because if you think about it objectively, two years ago, even Charli and Dixie’s current listeners wouldn’t be too interested in hearing about their life.