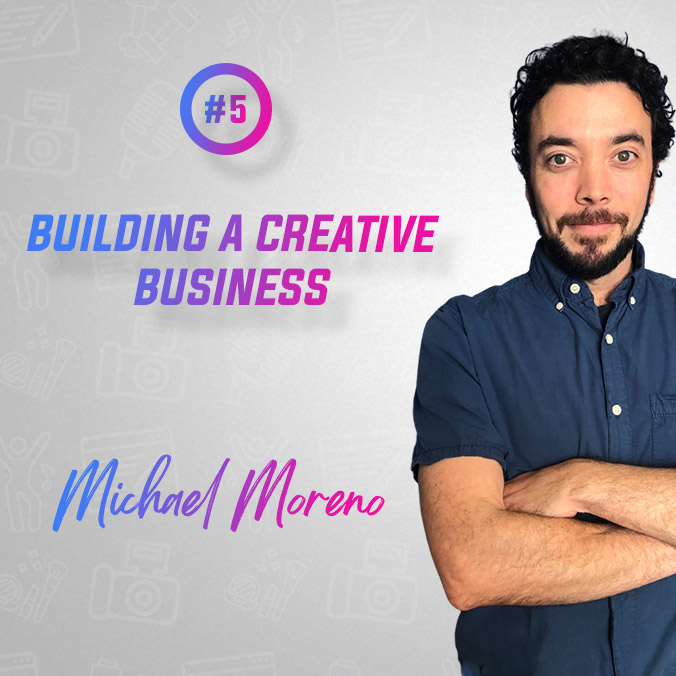 In this episode of Monday for creators we will give you advice on how to start online if you are an actor or artist.

Michael – Mike – Moreno is an actor based in New York City, has his own business called ‘Much More Media’, and is the founder of ‘The Actor CEO’ podcast, which has over 160K downloads, and reaches over 16,000 people all around globe. He has a BFA as well as an MFA, and is using his podcasting platform to help his audience understand how working in the creative field is like managing a business. Mike offers his listeners step-by-step advice on how to package their creative talents and sell them to others.

As an actor, Mike went to school, received professional training, had the opportunity to work in theatre as well as in production and television, had his own agent, and pretty much everything you’d expect a professional actor to do.

Yet, he felt something was missing. So he revisited some of the conversations he had with industry professionals, and the things he had learned back in school, and decided that it was now his time to impart the same teachings to anyone who’s interested. Mike became the mentor he once needed, and through The Actor CEO, he’s mentoring others who’re eager to do the same, and just need a little bit of push.

According to Mike, now is the ideal time for people to take their creative talents online with the pandemic raging on into its second year. He believes that if people aren’t doing so, they’re only doing a disservice to themselves. Sure there are risks involved, but Mike believes that we’re all accustomed to such risks anyway. Right now, artists have a lot of scope to put their work out to the public. You have platforms to share your music, videos, writing, and any other sort of talent you can think of. Hence, not utilizing them would be the biggest mistake people can possibly make in 2021.

Mike also explained how our smartphones make everything much easier for us, especially when it comes to showcasing ourselves or our talent in front of a worldwide online audience. He frequently brought up Clubhouse as an example and how, despite being rather new in the social networking industry, is doing such an amazing job of allowing people to present themselves to others. Other platforms, like TikTok and LinkedIn, should also be on people’s radars, because with the way things are progressing these days, creative professionals need to expand their reach.

When asked about his thoughts on what people need to remember or do while taking their creative business online, Mike suggested 3 key points:

First, he believes that you need to have a message, something that’ll resonate with your audience and tell them what it is that you’re trying to show or tell them. Basically, Mike is telling you to find your niche, and deliver it to your audience. You can be a singer, artist, dancer, comedian, or whatever you want to be, and your audience should know that. They need to know what they can expect from you.

Next, you have to choose your audience. And based on this, you’ll be able to decide which platform you’re going to use to deliver your content or promote it. For instance, if you’re doing acting or dancing, TikTok or YouTube is a more viable option than LinkedIn.

3. Your Way Of Taking Attention

Finally, once you’ve found your message and audience, you need to know how to communicate. Mike mentions how attention is the currency of the internet, and that’s exactly what you need to get in order to build yourself as a creative online professional, as well as your entire creative business. Creative producers, directors, or even your potential audience, may not be interested or have the time to watch 10-15 minutes of you doing comedy. However, if you release teasers or do smaller clips of 30-60 seconds, Mike believes that it’ll have a far greater impact. Afterwards, you can lead them into listening or watching more of it by providing the link to the whole act or performance.

The audience, being true, and building a relationship

Mike explained how having a million people subscribed to you means nothing if less than 1% of them are paying attention, or actually care about you. Instead, if you have even a thousand or a hundred subscribers, and 80-90 % of them are really invested in you, you’ll be in business. You need to communicate with people more to understand what they want, what they’d like to see, and then plan your content to suit these needs. Try to engage with them and incorporate any sort of feedback that they may have. That’s how you can build a relationship with them while staying true to yourself, and then keep building on your fan base.

Mike straight up said that getting viral is an unsustainable way of making it big. Even if it does work for creators, there’s no telling whether this fame will last them forever. Things will go the complete opposite way if that viral creator fails to live up to their audience’s expectations in the later days.

Consistency, and why Mike believes it’s the key to success

There’s no way to get success without a bit of hustle, and as far as Mike’s concerned, the more you hustle in this online economy, the better your chances are at growing your creative business. If you struggle ten times harder, the rewards you’ll be getting will be a hundred times better, and by keeping this consistency in your routine and output, success will surely come your way.

What if someone’s not comfortable with self-promotion?

Mike agrees that it’s okay to not want to promote yourself, but adds how, in this dynamic environment, getting attention to you or your work is necessary to grow. Mike also adds that if you’re not willing to promote your own work, you should at least consult with a publicist, but don’t fully stop on the promotions. Mike’s advice is to not see self-promotion as a part of marketing, but to see it as a way to portray the confidence you have in your work. This will help you engage and connect better with your audience.

How to garner attention from a gate-keeper or an agent?

Mike shared some valuable insights from agents he had interviewed on his podcast. He says how they’re always looking for people who’re already settled in the creative industry to some extent, and are regular with their work. Agents will basically act as your sales representative while a manager, on the other hand, can be there to look after your career as a whole.

Are willing to start your promotion online? Find more resources, apps & tools which will help you grow and monetize your talent and skills.