Emma Chamberlain: How Did She Become So Popular? 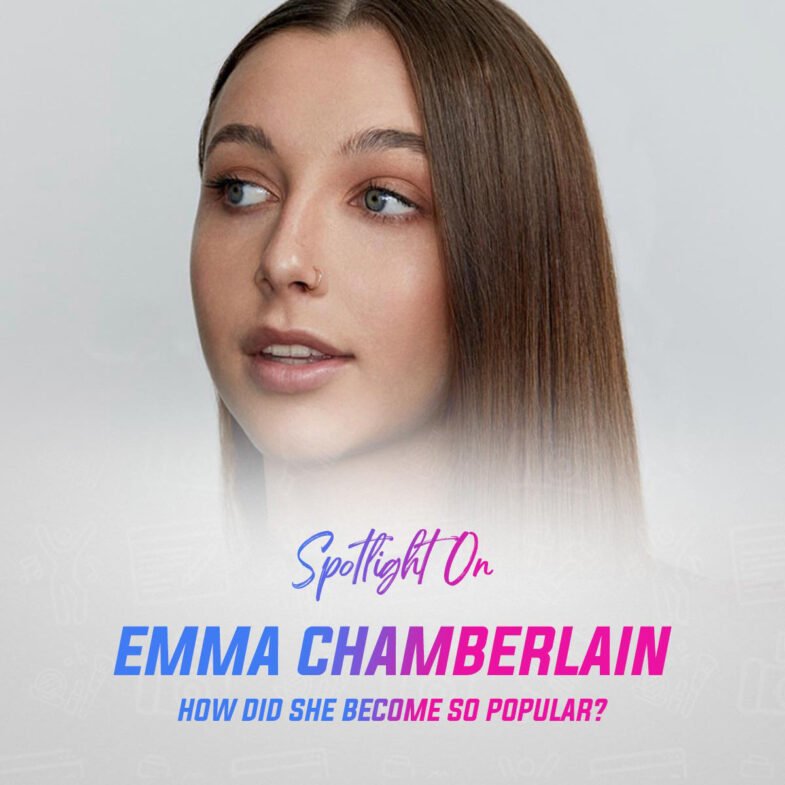 In three short years, Emma Chamberlain has become one of the most recognizable names on YouTube, amassing over 9 million subscribers in record time.
Her popularity has always been perplexing, but to new and aspiring creators, there’s so much to learn from Emma Chamberlain’s success. This week, we move our spotlight to Emma Chamberlain to discover how she became so popular, and how you can follow her methods to achieve the same result.

Born on May 22, 2001, Emma Chamberlain is the only child of her divorced parents. She grew up in San Bernardino, California before moving to Los Angeles when she was 17 to do YouTube full time. She’s a Youtuber, coffee and burrito connoisseur, and podcaster with an estimated net worth of $3 million. She’s also the most popular VSCO girl.

Emma Chamberlain’s subscriber size mirrors that of those who’ve been on YouTube for over a decade. Why? Because she capitalizes trends, is methodical in her uploads, and uses ‘clout’ from other influential content creators to achieve growth. Her story is unique, as she is the only VSCO girl/ relatable teen that’s nearing 10 million subscribers. But how did she do it?

Emma accomplished her widespread success through the four core stages of her career, each one helping her create the audience and influence she has today.

Emma’s first publicly available video is a 2-minute montage with voice over titled “City Inspired Summer Lookbook 2017”. The video was published on June 2, 2017, and marks Emma’s first steps to becoming one of YouTube’s most influential creators.

If you take a look at her first ten publicly available videos, you can see Emma was a trend connoisseur back in 2017, as 80% of her videos incorporated trends.

In November of 2017, she had nearly 300,000 subscribers, and her most popular video was titled “We all owe The Dollar Store an Apology” which at that time had just over 800,000 views, and combined two of the best trends of 2017: a haul, and the Dollar Store.

Dote and High Key represented the second stage in Emma Chamberlain’s rise to the top. Emma’s first Dote trip was a trip to Coachella with other teen YouTubers, that would later become known as the Dote girls. At that time she had over 1.6 million subscribers, making her one of the most popular girls on the trip.

Her brand partnership with the now-defunct app Dote enabled Emma to create YouTube friendships that would expand her brand. She often (and informally) collaborated with Summer McKeen, Ellie Thumann, and Hannah Meloche – whose subscriber base she leveraged by creating videos together.

Because these girls formed part of a group of what was known as ‘relatable teens,’ it was easy for Emma – and the other girls – to leverage each other’s audiences to increase in popularity. Had it not been for Dote, Emma Chamberlain wouldn’t have met the girls that helped her become the most well-known relatable teen.

Following the success of her informal collaboration with Ellie Thumann and Hannah Meloche, Emma Chamberlain started collaborating with three of the most popular creators on YouTube.

Although the ‘Relatable Teen’ collaboration was a chance encounter, the Sister Squad – which included James Charles, the Dolan Twins, and Emma Chamberlain – was calculated. The collaboration was designed to bring each member tremendous success.

Therefore, during June of 2018 and December of 2018, when the last Sister Squad video was posted, Emma gained 4.7 million subscribers.

Emma’s fourth and final stage is her diversification away from YouTube. In the past two years, she’s released two podcasts, Stupid Genius and Anything Goes, she’s started a coffee brand (Chamberlaincoffee.com) and she’s become an ambassador for Louis Vuitton, attending Paris Fashion week twice.
All of these ventures have helped her rely on YouTube’s algorithm less.

That said, a common pain point in the creator community is the YouTube algorithm. Many creators don’t understand how the algorithm works, but many agree that its outcomes aren’t consistent. One minute you’re the darling of the YouTube algorithm, the next, it never recommends your videos – not even to your subscribers.

What You Can Learn From Emma Chamberlain

Emma Chamberlain wasn’t a Viner, a celebrity, or a reality TV personality when she joined YouTube, so her success was unexpected. However, if you break it down, just like her career has had four prominent phases, the success of her content has relied on four aspects as well.
If you’d like to achieve similar results to Emma Chamberlain, keep reading.

Emma Chamberlain’s first ten videos were a catalog of 2017 trends. By latching onto trends she was able to grow from zero subscribers to 300,000 by the end of 2017.

When you create a video based on a trend, you know it’s something people are currently consuming.

That said, trendy video titles serve two purposes: they give YouTube an idea of who to recommend your video to, and secondly, those who are interested in these types of videos are more likely to click on your video if it appears in their recommendations.

However, for many new and aspiring creators showing your personality on camera is daunting. The fear of being judged is far greater on the internet as more people have access to it.
But trying to pretend you’re someone other than yourself will be seen as inauthentic and stifle your growth. While you don’t need to become a relatable teen to be successful, do include some components of your personality into your content, so it’s not boring. And so that your content is easy to distinguish from other creators.

Relying solely on YouTube’s algorithm can be detrimental to your longevity as a content creator.

Emma Chamberlain ensured she wasn’t restricted by YouTube’s algorithm when she collaborated with James Charles and the Dolan Twins. Not only did this collaboration give her exciting content, but she also gained exposure to audiences who otherwise wouldn’t have been recommended her videos, or wouldn’t have an incentive to watch.

The collaboration – which was orchestrated by their management – enabled Emma to grow substantially.

As an aspiring creator, this is proof that while you can grow to a certain degree because of the algorithm, it’s important to expand by collaborating with influencers in other genres. Something else Emma’s collaboration videos teach us is that for a collaboration to be truly successful you should do it over a set period. Emma’s collaboration with the Sister Squad lasted 6 months, which by the internet’s standards is a long time.

While Emma was growing on YouTube, she was diversifying away from YouTube by taking on other projects. The first project as a collaboration with now-defunct Dote on her exclusive clothing line, High Key. But she also started a podcast, created merch, and launched a coffee brand.

This (diversifying) is the final stage of a successful career as a content creator. While Emma has a strong and loyal subscriber base, her diversification into other ventures enables her to be independent.
Plenty of YouTubers who were very successful at some stage haven’t survived, because they didn’t diversify away from YouTube, and relied primarily on the algorithm for views and support.

However, in Emma Chamberlain’s case, she has a strong following on Instagram (which surpasses her subscribers on YouTube), she has a coffee company, and a podcast. She wouldn’t be severely impacted if YouTube suddenly stopped recommending her videos or her subscribers weren’t notified of her uploads.

To conclude, if you do make it as a content creator use your platform and your popularity to explore other passions and interests because putting your eggs in one basket isn’t going to work.

While her videos primarily consist of her sleeping, napping, and complaining about a lack of sleep it’s clear that Emma Chamberlain is doing anything but sleeping on the job. Instead, she’s maximizing her success to ensure she remains relevant for years to come.