TikTok isn’t only for teens. Influencers, creatives, and celebrities are seeing the benefits this mini-video platform has on their influence.

When TikTok first launched as Musical.ly, most creators overlooked it as a frivolous app dedicated to teens whose primary audience is children. But as the app grew in popularity, you couldn’t ignore its colossal reach.

Now YouTubers, streamers, entrepreneurs, millionaires, and billionaires who first cringed at the sight of pre-teens lip-syncing to popular songs have left the more established media platforms of Twitter, Instagram, and YouTube to seek TikTok fame – why is that?

To understand why Tik Tok is growing in popularity among an established crowd of creators and influencers, you need to look at the numbers. There’s no denying that Tik Tok has surpassed almost every other major social network launched since the beginning of the century, making it impossible to overlook from a pure numbers standpoint. 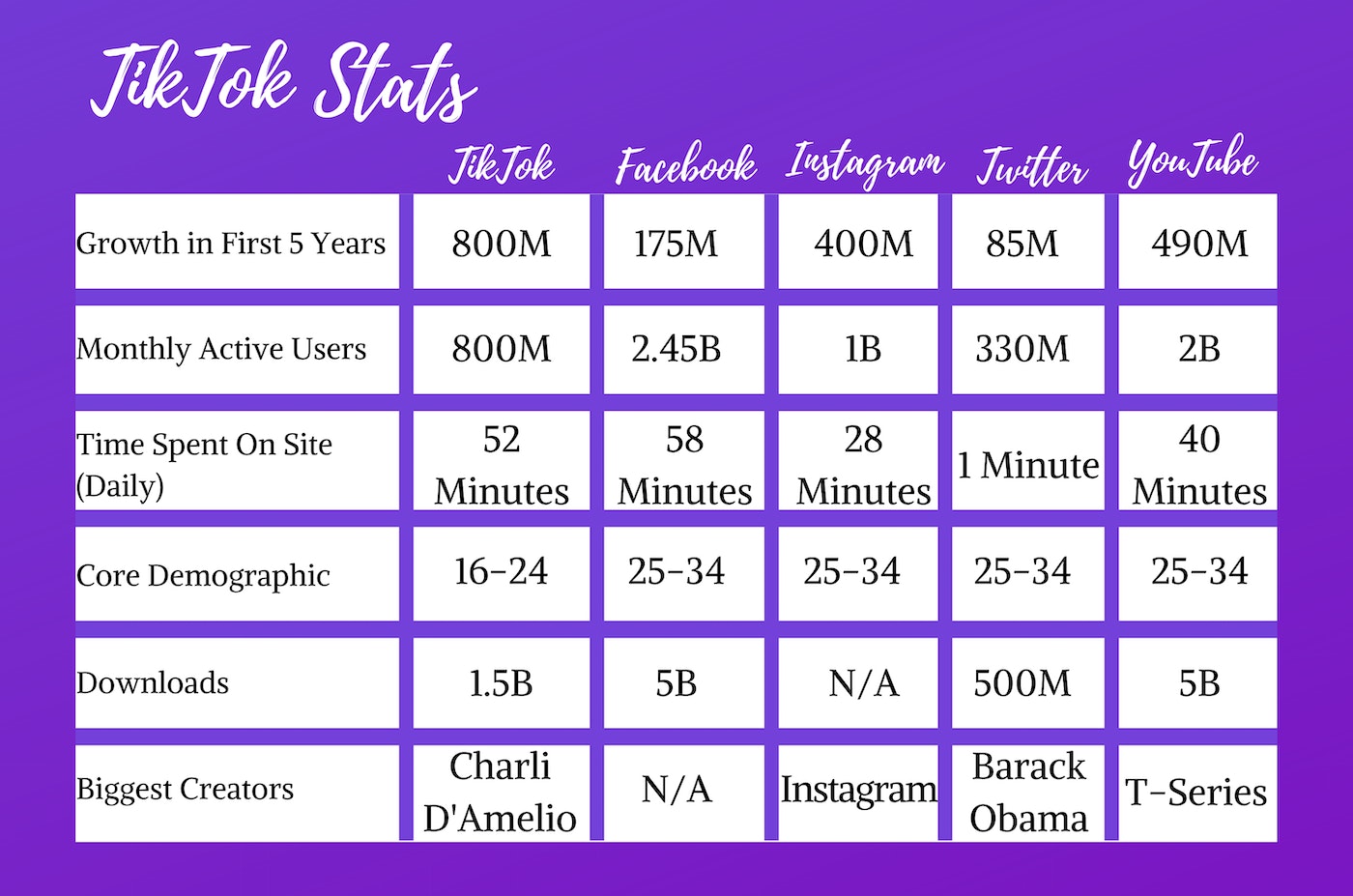 When compared to four of the most popular networks, it’s clear to see that in only four years Tik Tok (formerly Musical.ly) has outpaced the competition. Not only that, but its users are on the site for longer than users on Instagram, YouTube, and Twitter.

Furthermore, it’s the only app whose most popular creator is not a corporation, or a public figure – proving that anyone can make it on TikTok.

But, why should any creator care about these stats?

Could it have to do with the fact that TikTok is a growing platform of engaged users? If you’re basing where you choose to upload your content to this should be the criteria you focus on. After all, engagement drives success – just ask Charli D’Amelio.

Should You Join TikTok?

Digital marketers know that there’s no one size fits all approach in this industry. Choosing to join TikTok should be based on the data you have available, and not just because it’s trendy. That said, there’s a strong argument in favor of this successful app.
For the older or more established creators who have already grown their audience on other social media platforms, they may not see the point of joining TikTok.
If you’re one of these, perhaps it’s time to reconsider.

Digital marketing and social creativity are constantly evolving. It wasn’t too long ago when corporations and businesses scoffed at the idea of investing heavily in digital strategies, after all, their traditional strategies were working – or so they thought. This gave smaller creators, and the early adopters, a chance to grow and excel on these platforms.

Now, TikTok, an app that’s focusing on Gen Z’s, is dominating the space, and early adopters are seeing the results of their willingness to try something new.
For a creator, getting stuck in “what’s working” is the easiest way to squander your relevance and audience. To excel, you need to constantly seek out new and innovative ways to engage with your audience.

Keep in mind, the key to a successful digital strategy is to diversify. It takes only one TikTok to go viral for any creator to understand the power and creative outlet that is TikTok.  Not to mention, like any social media app, TikTok has an array of niches that cater to a variety of demographics.

Before you swipe left on Tik Tok remember, that in 2019 its users helped Lil Nas X reach the coveted No.1 spot on the Billboard charts. Additionally, its biggest creators have all launched thriving careers, and A-listers are joining the app in droves. Is this something you can justify ignoring?