Seamus Wray: The Rise of The Print-on-Demand Artist 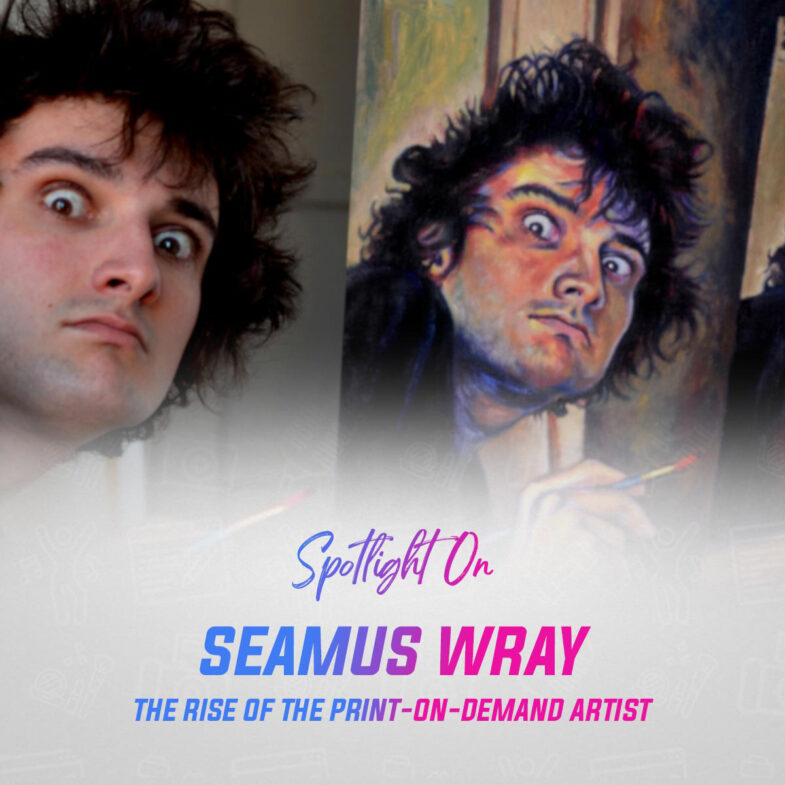 You won’t find Seamus Wray’s paintings in a museum, but he sure is one heck of a breakout artist in the same vein as Pablo Picasso and Vincent Van Gogh. Seamus Wray makes art for the masses, easy to consume, straightforward enough to understand, but still creative enough to draw your conclusions.

Who Is Seamus Wray?

Seamus Wray has been a constant figure in the online art community. But it was only after four years of somewhat consistent posting on apps like Reddit that he got recognition for his art.

The reason for this sudden recognition? A series of self-portraits of himself painting himself looking at himself. But, the story of his work is more nuanced. Besides that, not much information exists about his personal life, childhood, education, and journey into the arts.

Wray’s claim to fame is partly due to the power of upvotes on Reddit, but mostly due to his talent and mastery of “internet” art. Scrolling through his Instagram and Reddit profiles, you’ll see a catalog of his work, most of which are available on his Threadless Store. But, it was one particular series of self-portraits that captured the internet’s attention.

Seamus Wray explored infinity in his work before in another viral Reddit post. But this time he takes it further. Unlike in the last series, where he’s recursive painting concludes after two portraits and only includes one paintbrush, this time his portrait series is more complex. A paintbrush, a cat, and five stretch canvases are what it takes Wray to bring his most recent series of portraits to life. According to MyModernMet.com, he plans to continue the series.

For other aspiring artists or creatives, Seamus Wray is an intriguing yet inspiring story. How do you go from another poster on subreddits like r/Art and r/Painting to a well-known artist in your niche? We breakdown what you can learn from Wray’s work in three categories: Relevance, demographics, and ability for mass production.

The majority of Wray’s publically available artwork explores popular topics or are renditions of famous memes. While artists enjoy exploring advanced topics in abstract ways, part of the journey to internet notoriety is to explore topics that interest the masses.

For artists who share a similar niche to Wray’s, exploring relevant topics means your audience will always find something fascinating about your work. Relevance also increases the possibility that your artwork will go viral because it depicts something engaging. This means if your art is picked up as part of the lifecycle of a trend, you’ll reach a greater audience.

In the past, artistic appreciation was limited to a few genres and specific demographics, but those demographics have expanded tremendously over the past few decades. As a result, the rules of art in the digital are evolving to suit this new breed of viewers, who happen to be younger.

Is Seamus Wray making art for art connoisseurs? Certainly not.

His art is for a digital generation. People who are more likely to spend their afternoons scrolling through Reddit, and upvoting posts, than sipping wine at the Tate; this is Wray’s demographic.

For artists on the come up, this is something you can replicate. Instead of painting your artistic renditions, cater to the desires of your audience, by first defining your audience and then learning more about them. Think about what your audience wants. What will captivate their attention or be interesting to view? What are they going to like, share, and comment on?

Seamus said this was a social experiment. He wanted to see how invested people would become in the series. The more people were invested in the series, the more it grew.

Most of Wray’s artwork is available on his Threadless store. This means you can purchase his artwork on everything from a stretch canvas to a phone case, and a range of other everyday items. Ultimately, this is the culmination of his success online. Seamus Wray has created something that can be mass-produced. His artwork can be defined as a consumable, although profoundly artistic, it’s produced for the ordinary consumer.

In this way, it’s not entirely niche. It works great on a variety of mediums that aren’t a canvas because it falls into the category of the breathtaking world of print-on-demand art. Art that never loses its meaning, relevance, or message regardless of the amount of times it appears on a t-shirt, mug, or canvas painting.