Creator of the Month
ForCreators.com 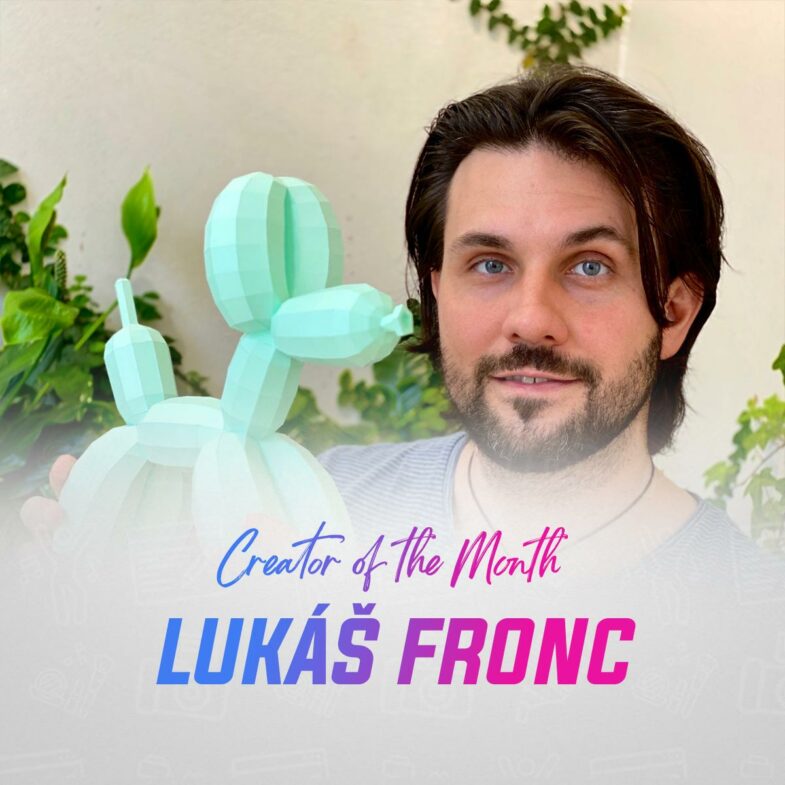 Lukas Fronc is the face behind Cut’n’Glue, a paper crafting company that’s set to change the world of paper crafting for novices and enthusiasts alike. His vibrant 3d papercraft templates and his astonishing ability to go from concept to product is why he was the creator of the week. These are some of the key takeaways from an interview with him earlier this year.

His Beginnings & Process of Becoming a Creator

Lukas is proof that with the right combination of creativity, ambition, and passion it’s possible to inspire change and creativity in others. This is his process of becoming a creator and successfully launching Cut n Glue on July 23, 2019.

The Process of Becoming a Creator

Having been a UX designer for almost five years, Lukas’ journey hasn’t always been straightforward. Starting in web and packaging design, he eventually settled on UX design as the ideal creative outlet for his work.

This UX design experience has been a tremendous help in his journey with paper crafting, especially as it pertains to creating easy to follow instructions for his papercraft templates.

Papercrafting has been a hobby since childhood, although Lukas took a brief intermission to focus on his studies and job; paper crafting has always been a passion.

However, the idea of doing papercrafts full time only developed a few years ago, although Cut n Glue only launched in July of 2019.

After waiting a while, inspiration struck “like thunder from the clear sky” and he finally had a muse.

He created the brand name, set up the domain, and the first idea and design of the logo in a matter of days. But, most importantly, he started designing his idyllic papercraft models.

Life Lessons From Being A Full-Time Creator

What are some things we can learn from Lukas’ journey? What are things Lukas has learned from his journey as a creator?

These are some key takeaways on the life lessons we had when conducting the interview.

Although he launched Cut n Glue in July of 2019, Lukas would’ve liked to start earlier. This is something many creative individuals struggle with, and something we spoke about briefly in the interview.

At the end of the day, he launched Cut n Glue!

But, for those of you still struggling with “cold feet” or doubt, learn from Lukas by taking the steps to launch your ideas.

Everyone struggles with procrastination from time to time, whether that’s exercise or assignments. In Lukas’ case, the idea of paper crafting had been circulating for quite some time before he took the steps to turn it into a business. Had he started sooner, Lukas contemplates that he may have had a wider portfolio of papercraft models and an established fanbase.

Although he considered the idea for three years when he finally took action it only took him a few days to build the brand, register the domain, create the website, and develop the first papercraft model.

What I took away from Lukas’ story is that oftentimes we’re so consumed by work or self-doubt that we procrastinate because we think launching something takes time. Just take a look at the Cut’n’Glue website, logo, and store. Although it only took a few days for Lukas to set this up it looks amazing. Granted, he does have UX experience…

Lukas refers to paper crafting as meditation because it allows you to tune out the world and focus on a creative task. Something Lukas wishes to accomplish with Cut n Glue is teaching others how to spend time creating something with their hands. Spending time on a creative task is an excellent alternative for digital fun such as gaming or streaming.

Time Management As A Creator

Because Lukas is a one-man band, many of the tasks he needs to successfully run Cut n Glue are his responsibility. Including designing models, creating social media posts, creating and managing the Cut n Glue website, managing his E-commerce store, creating videos, and marketing.

His greatest challenge at the moment is delegating his limited time into tasks based on priority.

However, something he learned from his time at Cut n Glue is that planning for the next day or next week gives him a better sense of what he can accomplish.

To overcome those lulls in mood and energy, Lukas says he starts with something more manual, then progresses to working on creative things; because he needs a muse and creativity to carry out more creative tasks. He went on to say that it’s not as simple as saying it’s 5 pm and he needs to create a model.

Another trick Lukas discovered is creating buffer slots in his calendar. Buffer slots, Lukas describes as dedicated days within a week to complete tasks he was unable to complete earlier. This is a genius, and remarkably practical, idea to ensure work doesn’t pile up.

It also works in instances where it’s difficult to predict how long a task will take.

Every creator has experienced some type of creative block. But Lukas has a remedy to overcome creative blocks so he can get back to work and create amazing papercraft templates.

Lukas attributes his ability to overcome creative blocks to these two elements: meditation and mindset.

Lukas spends time meditating, and doing things that will help him calm down, this helps him achieve a balanced mood so he can go back to being creative.

He discovered that where the stress of the job worked when he had a more conventional job, it’s detrimental to achieving creative success.

The second thing Lukas discovered is that mindset is integral to managing creativity. Instead of focusing on the desire to sell, he says, he maintains paper crafting is a hobby first and ambitions to sell are secondary.

When I asked Lukas about how he finds a balance between doing what he loves and generating income, his answer was simple yet profound.

“You can push yourself into results but your audience will recognize that you’re not authentic, or you’re not in love with what you’re doing.”

Therefore, you should focus on being creative and authentic first and your audience will gravitate toward that.

The second half of the interview focused more on the functional parts of production, in particular, what the creative process was like for Cut n Glue.

Whether or not you have the right idea will be determined later, when people purchase and enjoy crafting the papercraft.

Other models, like the balloon dog, were inspired by others.

How the model develops from the idea is routine. If you have an idea of the item you need to have references on how to design it. In low poly paper crafting, the idea is to keep the essence, keep the important shape.

For future products, Lukas has a mind map he can refer to for ideas. He then chooses what he should create based on the world of papercrafts because if something in his backlog is made by another creator it needs to be discarded.

When he has time to create new products he’ll look at products in the backlog.

Feedback is crucial for a project like Cut n Glue, where you’re creating products for others.

“If people don’t like what you do, there’s no point in doing it.”

Therefore, Lukas listens to what people have to say regarding all aspects of his work; from the papercraft templates to the instructions, and recommendations on how to improve video content. The most important factor in determining feedback, as a small creator, Lukas says, is both listening to what people have to say and seeing how well things sell.